The Inlaks Foundation was established in 1976 by Indoo Shivdasani to incorporate his existing philanthropic activities and to provide a permanent, independent body for the expansion of these activities. The Foundation has now been renamed the Inlaks Shivdasani Foundation.

The Foundation focuses on providing scholarships, grants and awards in various fields to outstanding young Indians to enable them to develop their professional, scientific, artistic and cultural abilities, both abroad and in India. It prides itself on being open to a wide range of subjects, many of which are not covered by other fund-giving bodies. Over the last four decades, more than 460 scholars have benefited from overseas scholarships while over 600 others have received awards and Take-Off Grants in India and abroad. Opportunities in India are offered through the Inlaks India Foundation.

The list of Inlaks alumni reflects the diversity of scholars that the Foundation has supported. Today many are leaders in their chosen fields the world over.

The key to the Inlaks approach is recognising and honouring individual talent. The Foundation looks for the unusual, searches out the special and spots people with promise. And once convinced, the Foundation does everything possible to encourage the candidate.

In 2008, the Foundation instituted the Inlaks Research and Travel Grant to enable registered PhD students of Indian universities to undertake short-term visits to institutions abroad to collect material, use facilities and consult experts.

In the last few decades, Indian art has enjoyed a vibrant and flourishing presence globally, although the financial support to young artists entering the domain has remained limited. With this in mind in 2012 the Fine Arts Award was enhanced and artist residencies were offered as part of the award to young emerging artists.

The Foundation has stepped up its support to the arts in many fields. An annual Curatorial Lab was supported and funded at the School of Arts and Aesthetics at JNU. Residencies are offered to artists and curators as well as to dancers and choreographers, both in India and overseas. With young artists and curators support is extended with the opportunity to exhibit. Museum professionals are supported at the ITP programme conducted by the British Museum.

The Foundation has also aided colleges and hospitals in Bangalore, Pune and Mumbai. 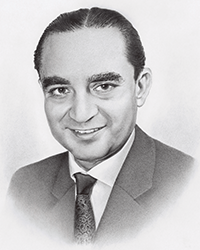 Indoo Shivdasani was the son of Hassamal Shivdasani, a member of the Indian Civil Service.  Like his father, he and many other members of his family were educated in India and England.  After Clare College, Cambridge, rather than following in his father’s footsteps, he became an entrepreneur, setting up his own business.  Within a few years his company went on to become a highly successful enterprise trading in West Africa and investing in agro-allied industries in Nigeria, India and France.

Mr. Shivdasani credited his Cambridge education for broadening his commercial and cultural horizons. He was a firm believer in the importance of higher education overseas for young Indians. He saw this as a way to foster their talent and develop their capacity to contribute to society.

“Why are you born?
What have you achieved?
What good have you done to your fellow man?
How do you propose to serve God in this world where he has given you the mind and the choice to be of use to yourself and others?
This line of thinking is very creative and in my case has also been very rewarding. I am conscious of my duties and I am always conscious that I owe a debt to this world and to the Creator.”